“I was born in Baltimore but I keep moving westward.  These days I call Colorado and Hawaii home.  I’ve raised children, worked more than a decade as a registered nurse, taught skydiving, studied history, and sailed many nautical miles with Bob, my husband.

I first knew I wanted to be a writer in second grade.  But then again I wanted to be a lot of things — including a musician, an actress, an oceanographer, a horse trainer, a dancer.  My mother warned me against being a jack of all trades!  The cool thing about being a novelist is you can be anything you want, you can try on different lives and have a go at different careers — all through your fictional characters.

With my husband Bob Russell I wrote two guidebooks:  Rocky Mountain Wineries; a guide to the wayside vineyards, and Colorado Kids; a statewide family outdoor adventure guide  (Pruett Publishing, 1994 and 1997).   Rocky Mountain Wineries was my first published book; we had a blast researching it!  We traveled all over the Rocky Mountain states one summer, in Bob’s 1984 Corvette, seeking out wineries and tasting hundreds of hand-crafted wines.

I began writing for publication just out of high school.  I sold my first article in college and have had a fair number of articles, essays, and short stories published over the years.   Like other writers I’ve gotten my share of rejections but I’ve also received some writing awards from Honolulu Magazine, Southwest Writers Workshop, National Student Nurses Association, and Daughters of the American Revolution.  In 1996 I was awarded the grand prize from the erstwhile Maui Writers Conference for my contemporary novel, With a Little Luck (which, ironically, had no luck at all)   My articles, essays, short fiction and poetry have appeared in a wide variety of magazines and literary journals, but I’ve always had my “day job”.  Or night job, in my case…

I  spent more than 13 years as a registered nurse, mostly in Emergency and Critical Care (with a stint in psychiatric nursing and oncology), teaching skydiving on the weekends, pursuing a second degree in History, studying French, traveling whenever possible, and writing for magazines as a sideline.  I’ve also worked as a waitress, shoemaker, film processor, gas station attendant, volunteer firefighter — and I spent two weeks skinning tomatoes with migrant workers in Carroll County Maryland.   Time travel I learned on my own!

I met Bob Russell skydiving, a sport we enjoyed for many years.  Together Bob and I have sailed many nautical miles on tall ships as well as aboard our own 36 ‘ sailboat Topaz.  I like writing about the life I’m living at the moment — and the many different lives I  imagine.” 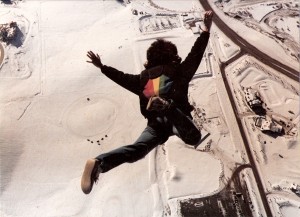 I’ve always been a writer. Whatever I’ve done in my life, I’ve written about it.  As you can see, it’s been a composite career, a patchwork, entrepreneurial life.  Through it all I’ve written. And still I write.

Historical novel, chosen by New York Public Library to be among the
Books for the Teen Age – 2007.

Collison, L.S.  “Paradise: On the edge and slipping.”  Short story.  Awarded runner-up in

Collison, Linda and Russell, Bob.  Rocky Mountain Wineries; a travel guide to the

Collison, Linda, R.N.  When to Take Your Baby to the Emergency Room.

Collison, Linda.  Skydiving in Tandem; the newest way to learn.

Collison, Linda, R.N.  Heartbeats, and Scanner II; a publication for the employees of

Collison, Linda.  Diabetes – a Challenge for the nurse & client.  Accepted for publication in Caring Practices, the Newsletter on Nursing the Elderly Patient. NY; Procter & Gamble.

Collison Campbell, Linda.  The Message.  Grab a Nickel; fiction and poetry from

Campbell, Linda and Phil.  Wildlife is where you look for it.  Wyoming Wildlife;