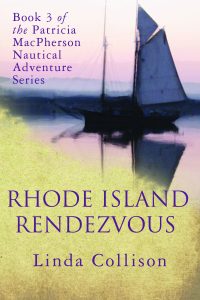 Maintaining her disguise as a young man, Patricia is finding success as Patrick MacPherson. Formerly a surgeon’s mate in His Majesty’s Navy, Patrick has lately been employed aboard the colonial merchant schooner Andromeda, smuggling foreign molasses into Rhode Island. Late October, amidst riots against the newly imposed Stamp Act, she leaves Newport bound for the West Indies on her first run as Andromeda’s master. In Havana a chance meeting with a former enemy presents unexpected opportunities while an encounter with a British frigate and an old lover threatens her liberty – and her life.

“An insightful look at life at sea during the colonial era, this novel offers a combination of adventure, discovery, and intrigue.” – The BookLife Prize

“Linda Collison’s Rhode Island Rendezvous thrills as a hard-to-put-down historical novel of nautical derring-do. Entertaining throughout, the expansive saga charts high-seas adventures between New England, the West Indies, and ports in between in the eighteenth century. The third novel in the Patricia MacPherson Nautical Adventure series picks up the engaging narrative of a cross-dressing surgeon’s mate who strikes out as a ship captain in a profession that was then solely the province of men.
Set during a period of social unrest in the American colonies after the Seven Years’ War, when people are rioting over the newly imposed Stamp Act, the meticulously researched novel tracks Patricia MacPherson, an upperclass woman in boarding school cast adrift after the abrupt death of her Caribbean plantation–owning father. Setting off on her own, she poses as Patrick MacPherson, a former surgeon’s mate in His Majesty’s Navy, disguising herself as “a rising young merchant seaman dressed to go to a wedding feast where he will rub shoulders with Newport’s best.” Determined to make her fortune, she becomes a smuggler who sneaks in molasses for “Yankee Gold” Rhode Island Rum and ends up captaining the schooner Andromeda as it embarks on a dangerous international voyage…” — Foreword Reviews