Portsmouth, England, 1760. Patricia Kelley, the illegitimate daughter of a wealthy Barbadian sugarcane planter, falls from her imagined place in the world when her absent father unexpectedly dies, leaving her no means of support.  Raised in a Wiltshire boarding school far from the plantation where she was born, the sixteen-year-old orphan stows away on a ship bound for Barbados in a brash attempt to claim an unlikely inheritance.  Aboard the merchantman Canopus, under contract with the British Navy to deliver gunpowder to the West Indian forts, young Patricia finds herself pulled between two worlds — and two identities — as she charts her own course for survival in the war-torn eighteenth century.

Barbados Bound was first published as Star-Crossed in 2006 by Alfred A. Knopf, and chosen by the New York Public Library to be among the Books for the Teen Age – 2007.  The story is basically the same but the author has made minor changes to the manuscript, in some cases replacing words and phrases edited out from the Young Adult version. 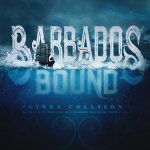