How We Write: The importance of place and time in storytelling

Sometimes I think I could live on the road.  For me, travel is inspiring, invigorating, instructive, and necessary.  Particular places — their histories, their inhabitants, their natural histories, their ghosts —  compel me to connect on a deeper level.

The setting is the story’s womb, its incubator. Place and time shape character and influence plot.  When I travel I immerse myself in the place, absorbing sounds, colors, tastes, the feel of the air on my skin, the way it smells, the slant of light — all the while getting a feel for the invisible past.  Meanwhile, characters quicken in my imagination, becoming entirely real to me.

Apparently I’m not alone in my obsession.  What places do you feel a connection with?

Susan Keogh is my guest author today, to talk about historical Charleston, South Carolina — the setting of her lastest novel, The Driver’s Wife.

“This book is a gem. Its descriptions of the colonial south are lush and vivid, which enhances the whole, but the extraordinary depth of characterization is what makes this story something special.” —  Tinney S. Heath, author of A Thing Done 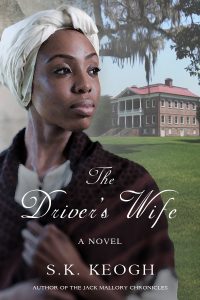 One of America’s greatest historic cities is Charleston, South Carolina. When you visit there, you will be struck by its beauty, its historic architecture, its food, its friendly people, its culture, and its area beaches. There is always something special going on, like the annual Spoleto Festival in early summer, a celebration of the performing arts like no other. In 2016, Travel and Leisure ranked Charleston as the “World’s Best City.” 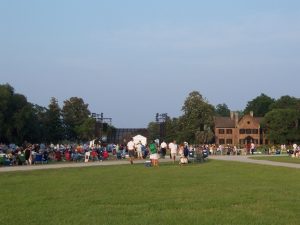 The Spoleto Festival’s finale is always held on the grounds of Middleton Place plantation.

Before writing my historical novels, I was most familiar with Charleston through its part played during the American Civil War. I think it’s safe to say that era in Charleston’s history is also most familiar to other Americans, as much for Gone with the Wind and the iconic Charlestonian character, Rhett Butler, as anything else. But once I began researching piracy in the late 17th century and early 18th century for my Jack Mallory trilogy of action/adventure novels, I read more and more about the early history of the city, known then as Charles Town, named after King Charles II of England. It would not be called Charleston until 1783.

Charles Town was a well-known pirate haunt. The sea marauders traded with and sold their pillaged goods to the British subjects of the town, who were happy to pay the lower prices the pirates charged compared to the more-expensive imported goods. It’s believed that even some of the province’s politicians were complicit in the trade. 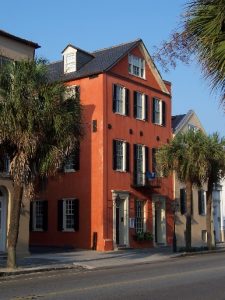 One of the most famous pirate-related incidents was in 1718 when Blackbeard besieged the city and held hostages. Eventually the hostages were exchanged for a chest of medicine, supposedly to treat venereal disease among Blackbeard’s crew. But Blackbeard’s connection with Charleston intrigued me. In fact, he was the inspiration behind my James Logan character in my Jack Mallory trilogy—both men led double lives as civilized men ashore but murderous brigands at sea.

Charleston is known as the lowcountry because of the many rivers and swamps that dominate the landscape. It was this topography that made it possible for rice to flourish and eventually make the city one of the wealthiest in the Colonies. Tourists today can visit area plantations that have survived from that era, including Drayton Hall, pictured below. I had this photo incorporated into the cover design of my most recent novel, The Driver’s Wife.

It is that Colonial-era plantation rice culture that provides the setting for The Driver’s Wife. The story is told from the points of view of two characters—a white man and a mulatto slave. I wanted to show life from both sides of the enslaver/slave culture, to illustrate the good and bad on both sides.

Rice may have made Charleston into a rich, flourishing city for families like Rhett Butler’s, but that wealth was garnered only through the backbreaking toil of countless numbers of African slaves, like my character Isabelle. Historic sites, like Middleton Place plantation up the Ashley River from Charleston, educate the public on rice culture, plantation life, and the slaves who lived and died on the countless plantations that hugged the rivers of the region.

I hope you can visit Charleston sometime, and perhaps its history will get into your blood the way it got into mine and provided a fully-realized world for the characters in my books.

Susan, writing as S.K.Keogh, is the author of the Jack Mallory Chronicles 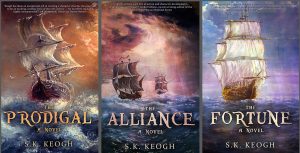 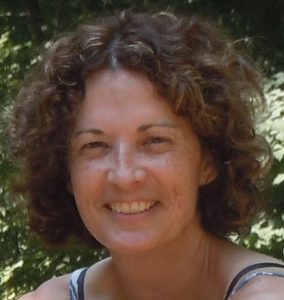 If you’d like to learn more about S.K. Keogh and her novels, please visit her website: skkeogh.com,

By lindacollison|2018-05-28T14:10:17-07:00May 25th, 2018|books, historical fiction, history, How We Write; a series of essays by guest authors, writing and publishing|Comments Off on Charleston — an inspiration for Keogh’s historical fiction