Enter for a chance to win Barbados Bound 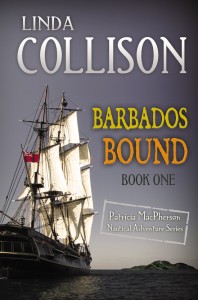 With Rhode Island Rendezvous, Book Three of the Patricia MacPherson Nautical Adventure Series, on the horizon we’re offering five copies of book one — Barbados Bound — as a give-away through Amazon. To enter the sweepstakes click on the link at the end of the post. We’ll also be giving away some Kindle copies soon.

Portsmouth, England, 1760. Patricia Kelley, the illegitimate daughter of a wealthy Barbadian sugarcane planter, falls from her imagined place in the world when her absent father unexpectedly dies, leaving her no means of support.  Raised in a Wiltshire boarding school far from the plantation where she was born, the sixteen-year-old orphan stows away on a ship bound for Barbados in a brash attempt to claim an unlikely inheritance.  Aboard the merchantman Canopus, under contract with the British Navy to deliver gunpowder to the West Indian forts, young Patricia finds herself pulled between two worlds — and two identities — as she charts her own course for survival in the war-torn eighteenth century.

Barbados Bound was first published as Star-Crossed in 2006 by Alfred A. Knopf, and chosen by the New York Public Library to be among the Books for the Teen Age – 2007.  The story is basically the same but the author has made minor changes to the manuscript, in some cases replacing words and phrases edited out from Knopf’s Young Adult version. 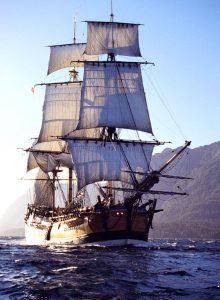 It all started with a ship. On April 14, 1999, I saw in the newspaper a startlingly anachronistic photograph of a three-masted wooden ship under sail. It looked like it had just sailed out of the eighteenth century. Below it, an intriguing advertisement:

Help wanted: Deckhands to man floating museum…a once-in-a-lifetime opportunity to sail as crew on Endeavour, the replica of Capt. James Cook’s ship that will visit Hawaii in November. Crewmembers sleep in hammocks slung together on the lower deck.  They must be prepared to go aloft and work the sails at any time of day in any weather, not suffer from chronic seasickness or fear of heights, and be physically fit.  Sailing experience is not essential…

Six months later Bob and I were at the dock in Vancouver, signing ship’s articles.

We spent three weeks aboard the Endeavour, as part of the foremast watch, crossing the Northern Pacific Ocean. We learned the names and functions of the hundreds of lines, sails and spars that power the ship; we learned to climb aloft on the ratlines, stepping out on the foot ropes under the yards to make and furl sail. We took turns steering the ship and were responsible for cleaning and maintaining her in eighteenth-century fashion. We slept in hammocks we strung from the deckhead every evening.

The voyage crew, as we green-but-willing sailors were called, bonded quickly, for we were all in it together and we all felt the same swing of emotions — anxiety, fear, fatigue, exhaustion, sea-sickness, hunger, occasionally resentment – but most of all, exhilaration and awe. For me, those weeks on the Endeavour were nothing short of a time machine.

When Bob and I disembarked in Kona, Hawaii, I carried with me the seeds for a novel. It would not be about Captain Cook or his extraordinary voyages, but it would begin in the mid-eighteenth century aboard a ship much like the one I had sailed on.

It would take me more than five years to research and write the story born aboard Endeavour. In 2006 Alfred A. Knopf published it under the title Star-Crossed, as a stand-alone, young adult historical novel which the New York Public Library chose it to be among the Books for the Teen Age – 2007. I had not written the story for teen readers per se, but I had written about a teenager, from her narrow and still immature perspective. Star-Crossed became Barbados Bound, the first book in a series about a young woman coming of age in the 18th century who tries to find her place in the world, disguised as a man.

Click on the link for a chance to win a trade paperback copy of Barbados Bound; Book One of the Patricia MacPherson Nautical Adventure Series. Open to readers in the United States who have an active Amazon account.