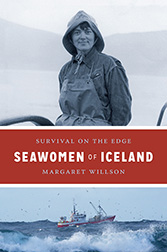 To visit Reykjavik’s Maritime Museum you would think there were no seawomen in Iceland’s history. (As of November, 2017, that is.) I first came across the mention of Icelandic female fishers in A Brief History of Iceland by Gunnar Karlsson (copyright 2000, translated by Anna Yates). A single, telling caption beneath a photograph (of a  restored turf shack used by crews during the fishing season in previous centuries) caught my attention:

“This shack which has survived at Stokkseyri, south Iceland, is known as Puridur’s Shack after Puridur (translated as Foreman, or, helmsman) Einarsdottir, who for 25 years was helmswoman of a boat that fished from Stokkseyri in the first half of the 19th century. It was not uncommon for women to crew fishing boats, but they very rarely stood at the helm.” ( Karlsson, pg. 24.)

Except for the brief caption, Karlsson says nothing more of female fishermen.

Willson, a professor of anthropology and Canadian studies, has experience working aboard fishing vessels in Tasmania in the 1970’s. In her very readable, painstakingly researched book she finds evidence for women working at sea historically (and has identified over fifty born before 1900.) The author includes chapters on present-day seawomen and looks at the Icelandic fishing industry, workforce, and working environment at large.

“The historic and present contributions of the seawomen of Iceland are virtually invisible,” says Willson. “These seawomen, who in recent decades have formed as much as 13 percent of Iceland’s fishing fleet, are unrecognized, even within the communities where they live…. Nearly all Icelanders with whom I have spoken, with the exception of a few seawomen themselves, are sure seawomen never existed.”

By keeping silent, by ignoring, we forget — thereby editing history through exclusion; it’s herstory too.

Thuridur’s winter fishing hut in the village of Stokkseyri, has been restored; a sign next to it gives an account of her life.