As National Novel Writing Month (NaNoWriMo) begins its final week, the home stretch, I’m working to finish the revisions on a novel I’ve had in the works for several years.  I can’t say too much about it, or else I will lose the drive, the muse, the mojo, the magic.  But let me tell you that it takes place at sea and there is a story within the story.   Some of the books I’ve read for background include Chinese Mythology, Zheng He; China and the Oceans in the Early Ming Dynasty,  When China Ruled the Seas; The Treasure Fleet of the Dragon Throne,  Eunuchs of the Ming Dynasty, and Chinese Junks and Other Native Craft, The Corpse Walker.

My fascination with junks began some years ago, when I saw the Intrepid Dragon at the Ala Wai Boat Harbor in Hawaii.  She reeked of ghosts.  I contacted one of the crew members and was invited on board.  It was a real “project”, in various stages of disrepair, but she was floating.  Which is pretty important, for a boat.  In fact, it’s the main requirement.

A few years later I saw the visiting Princess Taiping  a traditional Chinese junk on a Pacific crossing.  She was tied up at the Ala Wai fuel dock (aka, the Poor Boyz Yacht Club).  I took quite a few photos, I was so taken with this vessel (and if I can ever find them, I’ll post one or two.)   Tragically, in 2009,  Princess Taiping was hit by a freighter and destroyed, not long after we saw her.  (Thankfully all of the people were rescued.)

I’ve spent the past five years reading about junks and about Zheng He and the Ming Dynasty.  Meanwhile, I’ve been writing the story, which partly takes place in the present, and partly in the past.   Now, I’d better get back to that revision if I want to be finished by the end of November.  Working title?  Good Fortune… 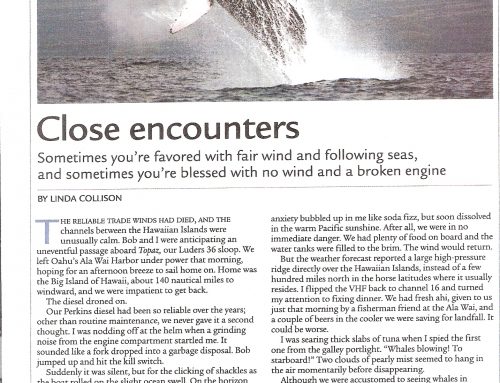