Rhode Island on the horizon

Maintaining her disguise as a young man, Patricia is finding success as Patrick MacPherson. Formerly a surgeon’s mate in His Majesty’s Navy, Patrick has lately been employed aboard the colonial merchant schooner Andromeda, smuggling foreign molasses into Rhode Island. Late October, amidst riots against the newly imposed Stamp Act, she leaves Newport bound for the West Indies on her first run as Andromeda’s master. In Havana a chance meeting with a former enemy presents unexpected opportunities while an encounter with a British frigate and an old lover threatens her liberty – and her life.

What began as Star-Crossed, published by Alfred A. Knopf in 2006 as a Young Adult historical novel, has become the Patricia MacPherson series — adult historical fiction. Not that there is graphic sex and gratuitous violence in the adult editions, but because I always intended it for adult readers, which includes many mature teens.

For me, chronicling Patricia’s story has been a way to rediscover history through the eyes of an orphaned teenager, born of a rich English planter in Barbados, who matures as she is forced to make her own way in the world. Writing in first person as I have done is a very immediate and personal experience, almost like reliving a past life.  So intense is the immersion, and challenging because of its limitations, I’ve added a prologue to Rhode Island Rendezvous; a prologue written in close third person from Patricia’s former lover’s perspective.

Writing a book is indeed a journey.  A fourth book and final book in the series is planned and the voyage is soon to begin… 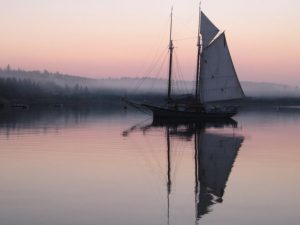 The inspiration for the fictional vessel Andromeda comes from the historic Schooner Lewis R. French, pictured here, and used with their generous permission. While not from colonial times, the Maine-built schooner was launched in 1871 and is very traditional in her design. According to her website, “she freighted bricks, lumber, firewood, granite, fish, lime, canning supplies, Christmas trees, and now people.” Bob and I were among those people, having had the pleasure of cruising aboard the French some years ago. Highly recommended, if you get the chance!

Today she is still powered by sail alone (no engine) — with occasional assistance from a motorized dinghy.  To learn more, visit the schooner’s website schoonerfrench.com