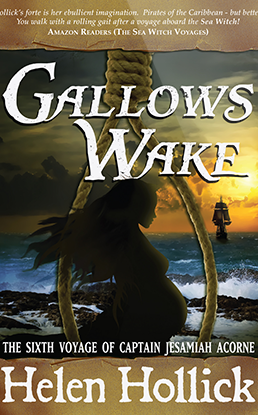 Behind every great man is a woman, I’ve heard it said, and behind every good pirate is a witch. A good witch, I might add. Gallows Wake, number six in Helen Hollick’s Sea Witch Chronicles, is a gutsy adventure/romance rooted in historical fact but not limited by it.  A touch of fantasy, or shall we say witchery, is very believable, even in this 21st century.

Gallows Wake continues the adventures of Jesamiah Acorne, that fallible former pirate and his lover, Tiola, who happens to be a woman of the Craft. That Tiola’s supernatural abilities are so believable, practical magic of the old world and a real plus for this series. These two protagonists are indeed a match for each other, even when they’re arguing or at odds. Without giving any spoilers, Tiola, separated from Jesamiah, faces the crisis of her life.

Helen Hollick knows her way around a ship and grounds the series in real historical events, yet she is never completely bound by them. That’s the magic of her writing. What I like best are her well-drawn characters who complement and antagonize each other in surprising ways. Jesamiah, an anti-hero worthy of a Johnny Depp portrayal, is contrasted with his sidekick, Maha’dun, a unique and perplexing creature the author describes in delightful verbal brushstrokes — very cinematic.

Gallows Wake, the Sixth Voyage of Captain Jesamiah Acorne is “Pirate Fiction” in tone, a lively adventurous romp on land and sea. The romance of a pirate and a witch is a new twist in nautical fiction and I found it perfectly natural. After all, the story is set during an age when many people still believed in witchcraft — and witchcraft was punishable by death in the British Isles up until the early 18th century. (The National Library of Scotland lists Janet Horne as the last person in Britain to be tried and executed for witchcraft, in 1727.)  That is the dark reality underlying Hollick’s entertaining Sea Witch Chronicles. Pirates were hung and witches were burned.

I can’t wait to see what Hollick brews up in Jamaica Gold — Voyage 7 — in progress. She hints of bringing the historical pirate Anne Bonny into the narrative.  Bonny was pregnant when tried with the pirate Calico Jack Rackham in 1720. Anne was pregnant when captured and tried. That much is known. But what became of her? I am on board to find out what truthful fiction Helen Hollick is in the process of conjuring up.

This site uses Akismet to reduce spam. Learn how your comment data is processed.