Transgenders serving on ships is nothing new.

I’ve long been interested in women on ships in the Age of Sail — particularly women posing as men, passing as men, doing what was considered men’s work. This interest arose when I signed aboard HM Bark Endeavour, a sailing replica of Captain James Cook’s historic ship, and lived the life of an 18th century seaman for three weeks. This life included heaving, hauling, standing watch, taking my trick at the helm, and going aloft, out on the yard arm to make and furl sail. It included stringing my hammock from the deckhead, snug alongside the other recruits, and taking my turn in the galley. (Although my husband was aboard as crew too, we never once slept together — nor did we even sleep next to each other!) What I learned was that although the work is hard and requires some training, it doesn’t require a Y chromosome.

I’m not by definition transgender. Nor is my fictional character — though in her mid-18th century world she has found it more convenient to be male than female. Actually, she’s found it expedient to be male.  The term transgender first appears in 1974, according to Miriam Webster’s online dictionary, so the concept, as such, doesn’t exist in my series. But the problems are similar: Individuals not allowed to serve in the military because of their apparent sex.

As I’m writing my way through Patricia’s story in the Patricia MacPherson Nautical Adventures, I’ve learned a lot about life in the 18th century from a female perspective  — a young white female of British heritage. Much depended upon parentage and social standing.  Much depended on luck. And of course much depended on their sex. 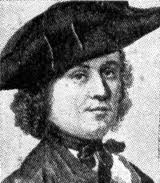 Hannah Snell, Royal Marine. Born 1723, died 1792. Buried with the old soldiers at Chelsea Hospital, which was her wish.

The Age of Sail was an Age of War. The emerging nations of Europe waged battles — entire wars — at sea. The need for sailors, marines, and craftsmen continued for several centuries, offering a few hardy and daring females an opportunity to escape social and economic confines, to find adventure – or maybe they were just looking for three meals a day and a hammock to sleep in. For a destitute young woman, life aboard a ship was safer than life on the streets.

What we know about these desperate imposters comes mostly from naval records, broadsheets, and the romanticized biographies and fictionalized memoirs written by or about these cross-dressing or transgender figures. One of the most well known and well documented 18th century female soldier/sailor was Hannah Snell who served first as a soldier in General Guise’s regiment, then as a Royal Marine in Frasier’s Regiment under the name of James Grey. She saw action and was wounded several times in India  “Here is a Woman, and an English Woman, who, notwithstanding the many Dangers and Vicissitudes she underwent for near the Space of five Years, during her Travels, was never found out to be of the feminine Gender.” — from The Female Soldier; the Life and Surprising Adventures of Hannah Snell. (Project Gutenberg) Hannah herself couldn’t write but she sold her story to a London publisher Robert Walker. After she left the service she performed military drills on stage in costume and sang military songs and The Gentleman’s Magazine reported her story for its readers’ enjoyment.  Hannah Snell’s story is unusual in that the Royal Hospital recognized her military service and granted her a pension.

Stories like Hannah Snell’s have inspired my historical novels. I’m not out to prove that cross-dressing or transgender women existed — we know they did — but to explore why they chose that path and how they might have carried it off. Although Hannah Snell’s memoir (published anonymously but likely penned by her publisher) claims finding her estranged husband was her inciting reason, I suspect that was a literary convenience for the publisher, and one the readers might readily accept. The chance of her finding her errant seaman husband was slim — but the chance of her earning a living was guaranteed. Not to mention respect, opportunity, adventure — and a pension.

There may not have been great numbers of cross-dressing women on board ships in the Age of Sail. But there were some. They existed. They carried it off. At least, for a while.